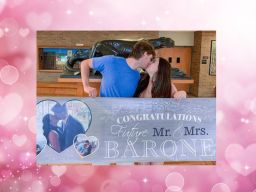 Jesse Barone thought he had the perfect proposal set for his girlfriend Kelly O'Hara. The two were planning a trip to Bermuda, and Jesse was looking forward to popping the question on a beautiful beach. But when the coronavirus started to spread and travel restrictions were put in place, Jesse had to think of plan B.

Jesse and Kelly met in biology their freshman year at Springfield High School. They dated throughout high school and were even voted "Cutest Couple" their senior year.

After graduating from Springfield High School, Kelly attended Drexel University with a major in Graphic Design. After earning her degree from Drexel, Kelly traveled to Los Angeles with a friend and worked in the entertainment industry for Creative Impact Agency. After living in LA for two years, Kelly decided it was time to move back to the East coast and accepted a position in New York City.

Jesse attended Temple University with a major in Finance. After graduation, Jesse worked in Philadelphia while studying to become a CFA. When Kelly decided to move to New York City, Jesse joined her and began his career with BMO Capital Markets.

The couple currently resides in New York City, but has been staying with family since the rise in coronavirus cases in New York. Since Jesse was ready to pop the question, he brainstormed a way to make sure his proposal was meaningful and memorable.

With the help of friends, Jesse set up a tour of the high school, under the guise of Kelly being able to see her alma mater once last time before being torn down. The couple roamed the halls, reminiscing of their time at the high school. When they came to the biology lab, the class where they first met, Jesse went down on one knee and asked Kelly to be his wife.

While his proposal may not have been his original plan, Jesse made sure that his fiancé, Kelly, had a beautiful proposal to remember.

The Springfield School District wishes you a lifetime of love and happiness. Congratulations!