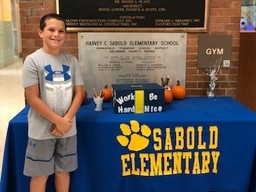 Sebastian Simone, or Bash, as he is also known, is a hard-working 5th grader at Sabold Elementary. On the weekends, he can be found playing football, basketball, baseball, wrestling, or playing Madden on X-Box. Bash is also a big Philadelphia Sports fan...except for basketball when he roots for the Warriors and his favorite player, Steph Curry.

Bash is a student that likes to do the right thing. He tries hard to finish every task that he undertakes. Last year, Bash was asked to take a leadership role on his football team. He was honored and proud that they needed him, but he had never been in a leadership position before and was unsure if he would thrive in that position. Bash put his fears and insecurities aside and rose up to be the leader that his team needed.

Bash is a friend that consistently provides encouragement, support, and leadership. If a friend is having a difficult time, he offers support and he will even change his recess plans so that they have a good friend by their side. Bash's mom says that he has always been a shy child, yet one filled with compassion. He has always been the helper, the one you can count on to get the job done. He makes sure every day to live up to the school motto: Work Hard, Be Nice.

Bash's 5th-grade teacher, Mrs. Connor, says of Bash, "Bash is an amazing young man who is a role model for all who meet him. His positive attitude and willingness to persevere during the toughest of times is inspiring. It would be a challenge to catch him without a smile on his face. In class, he works hard putting forth his best effort in everything he does while being a good friend and classmate to his peers."

Bash humbly admits how hard he works on and off the football field. No matter how difficult the tasks are, Bash is up to the challenge. Bash recognizes and accepts his role as a learner in the classroom and puts in the effort needed to succeed. Sebastian listens to his teachers' advice and guidance and applies it to his work. Sebastian has a clear goal- to get better. He arrives at school every day with a focus on getting better, and he accepts nothing less for himself.

Like most 5th graders, Bash worries about his grades in Science, or whether he is going to make the A-Teams (which he always does). But in September, Bash had to worry about something that no 5th grader should have to, his dad. Bash's dad suffered a stroke in August and was in the hospital, then a rehabilitation facility until he was strong enough to come home to recover with his family.

Bash was thrilled when his dad was strong enough to leave the Facility. He says, "Everything feels right again now that he is home." Bash's dad is receiving out-patient care to help recover from his stroke, but also needs support at home. Bash is proud to say that he helps his dad get dressed, with feeding, to get up and down the stairs, and to get comfortable. Bash's dad says that he takes care of everything. He is 'The Man' when something needs to get done.

Bash humbly shared that his dad recently told him that when Bash oversees his care, "that is the time when he feels the safest". Bash also is a wonderful big brother. Through his dad's hospital stay, he comforted and coached his brother through tough periods. He was also his biggest fan during sports just like his dad would have been if he were there. He is now helping his brother learn how to assist his dad in his daily activities.

Update: At the time this story was published, Bash's dad is still working hard to gain back basic functions he lost due to the stroke. He walks with assistance and sets new walking goals daily, which makes his favorite time of the day when the bus arrives to drop off his boys.

Click here to view more articles on the Grit and Growth Mindset series.