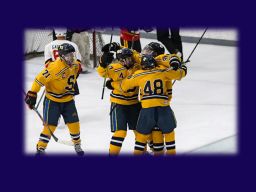 Ryan O'Connor doesn't need much of a reminder about how last season ended for the Springfield hockey team.

The Cougars fell to Haverford in the Central League championship game in a rematch of the previous year's title bout, a 3-2 Springfield win cemented by Colin Hannigan's overtime winner on a rebound in front. They followed that up by bowing out to Sun Valley in the Flyers Cup quarterfinals, a disappointing finish to a year that started with so much promise.

Those games have served as plenty of motivation for a Cougar team that should be front and center in the Central League yet again.

"We've got a big group of guys that are really ticked off with how last year ended," said O'Connor, an All-Central defenseman who scored four times and added five assists in 13 games as a junior. "We've been working hard in the offseason and we've got a different mentality in practice. We're more locked in. Two years ago, we won the league by not trying to be fancy and we're getting back to that mentality to put us in the position that we want to be in."

The Cougars' road to redemption starts on Monday, Nov. 1 at 9:45 p.m. at the Skatium in Havertown when Springfield takes on Penncrest. Springfield is one of eight teams in the Central League's hockey and will play Conestoga, Penncrest, Radnor, Garnet Valley, Strath Haven, Haverford, and Ridley twice apiece. The Cougars round out their schedule with an incredibly challenging nonleague schedule with battles against all three West Chester schools, as well as Cardinal O'Hara.

"I'm sensing a little bit more energy and urgency in practice," Springfield coach Phil Eastman said. "They want to go out on a high note and change what happened at the end of last season."

The good news is that there's a lot of returning talent for Eastman and his staff to work with. Seniors Zach Crain and Dominic Romolini are as good a forward tandem as any in the league. Crain, potentially the league's best passer, earned first-team All-Central honors a season ago as he tossed out 19 assists to go with 14 goals. Romolini, no stranger to the front of the net, supplied a balanced 12-goal, 12-assist stat line. They'll anchor the first line and will likely be joined by sophomore Danny White, who should make a significant jump from his 10 points from a season ago.

True to Springfield form, the Cougars will have plenty of balance throughout the lineup. Eastman figures to trot out a second line made up of all seniors in Hannigan, Devin DeStefano, and Adam Baumann. Together, they combined for 36 points a season ago, led by DeStefano's six goals and 10 assists and Hannigan's six goals and seven assists. Replicating those numbers would be good. Improving on them could be the difference that the Cougars need to win their second title in three years.

Expect to see seniors Ronan Mulholland and Reese Bean alongside Frankie Izzi on another line, while sophomores Cole Miragliano, Braden Barber, and Joe Cicala formulate another one.

There's no reason why Springfield can't have the best defensive corps in the league. O'Connor is the headliner, but what makes this group potentially special is the depth behind him. Fellow seniors Nolan Huntley, Scott Francis, and Fran Doerr will be vital cogs, while junior Aidan Kertis and freshman James Happas round out the six-man group. Playing three good sets of defensemen is a luxury that few have in the league, so Eastman's got some potential to work with.

"Having four senior defensemen, in particular, is great," Eastman said. "They've played in big games. It's an important experience to have with that group of seniors, and we hope they can put it all together."

There's more stability at the most important position on the ice, too. Seniors Tyler Philiposian and Luca DiMarcantonio have been a solid tandem in the Cougars' net for three seasons, and Philiposian's emergence as a sophomore and brilliant play in the playoffs were a huge reason why the Cougars won that championship. He's the starter, but DiMarcantonio will also play and Eastman is confident that he'll also deliver some great goaltending.

A proud group that took it on the chin at the end of last year is supremely motivated, and that's traditionally meant bad things for anyone on the Cougars' schedule. Senior-heavy teams also tend to do very well in this league, so the pieces are all there for Springfield to make its way back atop the Central League throne. The odds are good that they'll have to go through the Fords to do so as the two teams are, on paper, a cut above the rest of the league. When they get to the Flyers Cup, Springfield won't have to worry about the Fords, who play in Class AA while the Cougars vie for the Class A title.

Springfield, however, will likely see some combination of the West Chester schools, all of which they'll play in the regular season. West Chester East went undefeated a year ago and brings back another loaded roster. Despite that, there's no reason why Springfield can't forge another deep postseason run.

"We know how embarrassing it was last year," O'Connor said. "We got destroyed in front of our entire school, so we're using it as fuel every game this year. Coach Eastman says that our legacy starts now, and having that big senior class really helps us. It's not just the guys with letters that can lead. The majority of our class has been playing on varsity since sophomore year. We're approaching every game the same way this year."