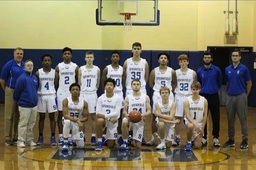 Cougar Boys Basketball
Jan 2 2020 11:27 AM
Share to FacebookShare to TwitterShare to Google+Share to LinkedInShare to PinterestShare to EmailPrint this page

Last season didn't go as Kevin McCormick planned for the Springfield boys' basketball, but now that a tough season is in the past, the veteran coach already sees a silver lining to it.

"We're a lot more experienced this year," McCormick said. "Every player got varsity experience a year ago, and I think that they recognized how they needed to improve in order to compete at the varsity level. They worked very hard in the offseason and we have to learn to win again, but they've certainly put in the work to get there."

McCormick will rely heavily upon senior Brian Ward, who was the only player with varsity experience entering last year. A versatile wing who can also stretch out defenses from the power forward spot, Ward has the versatility and leadership abilities to emerge as one of the premier players in the Central League.

"He started every game last year and he's our emotional and energy leader," McCormick said. "He'll do a lot for us. He shoots the 3, he can isolate in the post, he can reposition and attack gaps. He's physically strong enough to wear guys down."

Junior Cole Rhodes and senior M'khai Terry will play major roles alongside Ward. Rhodes has gotten taller and put in significant work in the weight room to get stronger, while Terry has worked hard to improve his touch around the rim to go along with a nice perimeter shot.

"When he's in attack mentality, Cole can do some things that others can't, and it's been fun to watch his maturation. He was a bit more reluctant to attack last year, and that's changed," McCormick said. "M'khai is about 6-4 with a long wingspan, and along with his offensive work, he's also going to be depended upon to defend the opponent's top interior player."

Juniors Elijah Busby and Brendan McShane round out the starting lineup. Busby will be tasked with being the floor general from the point guard spot, while McShane is a 6-8 tower of power in the middle who can do a lot of things that you'd traditionally expect from a center, like blocking shots, clogging the lane and collecting rebounds.

"Elijah has plenty of speed and he's gotten much stronger, and he's starting to understand what we're doing both offensively and defensively," McCormick explained. "Brendan is 6-8, and you can't teach 6-8. He can do a lot in the low post and he can also run the floor."

Junior Ben Storz and seniors Tanner Robinson and Nasir Cryor will see significant minutes off the bench. Storz, along with Rhodes and Ward, are all National Honor Society members, something that McCormick is very proud to point out. Storz will stretch defenses out with his 3-point shooting ability, while Robinson is a jack-of-all-trades type who can bring a ton of energy to three different positions. Cryor adds much-needed depth to the backcourt.

Add 'em all up, and there's no doubt that this team will see marked improvement across the board.

"We're going to run a lot of sets and push the pace opportunistically," McCormick said. "We want to defend relentlessly and get good, quality offensive looks. I'm excited to see what we can do."