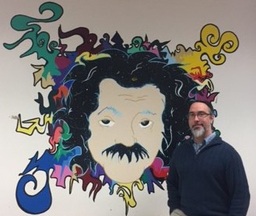 ROB HERMANN LAUNCHES ASTRONOMY COURSE
Nov 21 2018 9:38 AM
Share to FacebookShare to TwitterShare to Google+Share to LinkedInShare to PinterestShare to EmailPrint this page

A teacher's role consists of many parts, perhaps the greatest of which is inspiring students to "reach for the stars." Work hard and have serious goals.

This school year, Hermann has been able to reach a goal of his own by bringing students an opportunity to study astronomy and earn college credit at the same time. The stars, planets, galaxies and all matters cosmic are all within the scope of this first-time class offering.

Although Hermann is anxious to get right to the course, some background is relevant. As a Springfield High School alumnus, he mused his current classroom is the one in which he took chemistry. After graduation, he went on to three different universities in the greater Philadelphia area. Majors changed from graphic design to psychology to education.

While at West Chester University pursuing a graduate degree, he found his passion for science. Nearly two decades later, that enthusiasm has only increased. He returned to the district and taught at E. T. Richardson Middle School. When the high school had a sudden vacancy for a Physics teacher, Hermann was asked to take the position and is in his seventh year. In addition to teaching, he coaches HI-Q and Science Olympiad teams.

"This is a great district to work in. Every step I have taken has made my job better," said Hermann, married and the father of three school-aged children.

Those steps included becoming the Science Department Curriculum Coordinator and the quest to develop the astronomy course.

"It's something I've wanted to do and began with a half-credit course. There was a broad interest, and I got good feedback from students. The course always filled up, and I felt there were students who wanted more."

Hermann seized the chance to work with Delaware County Community College which has a collaborative relationship with the district. Eligible students can take courses at DCCC, but the program also enables qualified SSD instructors—such as Hermann-- to teach in the high school and offer DCCC credits to students meeting achievement standards. At both DCCC and SHS the astronomy class includes a lab component.

After a year's delay from the DCCC side, the course was set into motion—a perfect segue for the celestial bodies. In addition to a hefty text called "The Cosmic Perspective," (a title not to be taken lightly), Hermann takes full advantage of technology. He can access the Green Bank Observatory in West Virginia and the Skynet Robotic Telescope. He was trained and is part of the Pulsar Search Collaboratory (PSC), funded by the National Science Foundation.

"The telescope allows us to pick up radio signals of pulsars. The mission of the PSC is to get people to search and spot for a dead star."

During his seven weeks of training, Hermann studied with world renowned West Virginia University radio astronomers Dr. Maura McLaughlin and Dr. Duncan Lorimer and learned how to operate the 20 meter telescope at the observatory, collect astronomical data on pulsar candidates, and evaluate the data. Hermann's astronomy students will also culminate their training exercises by analyzing radio signals; attempting to find a new pulsar.

Hermann explained some of the finer points on the subject. "Pulsars are remnants of dead stars. If Earth is in the line of sight of that star's beam, we see the star's remnant pulse like a lighthouse, ergo the name pulsar. That pulse is collected as a radio signal and observed in unique patterns of data. Computers are used to 'develop' the data, but only the discerning human eye can interpret the data as a pulsar or background radio-noise. That is where we come in. My students will culminate their training exercises by analyzing radio signals; attempting to find a new pulsar candidate."

This DCCC Astronomy course provides the opportunity for SHS students to conduct authentic scientific research and to interact with scientists, researchers and other students. The entire scope is possible through the technology made available to the SHS program.

"Everyone is naturally curious about our world. Space is far away and mysterious. That's why I love teaching this. Physics—the laws of nature—doesn't change. But astronomy changes all the time," Hermann said, underscored by constant advancements in technology.

Hermann referred to his own experience in graduate school of astronomy being an "intellectual playground."

"I want this subject and excitement to be the reasons students are coming into class. I want their dinner conversations to be about 'what I learned in class today.' For some kids the interest comes from science fiction. Others like physics and chemistry. But with astronomy, the cosmos is your laboratory."

"That curiosity makes kids come back tomorrow. What I want is to give kids a sense of wonder, and know that we are able to figure out things like distance between stars," he said. "It's more than a body of knowledge. Today you can look anything up. I want them to have the desire to do so. I want them to spend time marveling at the cosmos and have at least a small sense of awe. You can't Google inspiration."

Hermann closed his interview by taking note of a coincidence. A former student has painted a mural of Albert Einstein for whom Hermann has great admiration. It includes the quote: "Imagination is more important than knowledge." The quote continues, "For knowledge is limited, whereas imagination embraces the entire world, stimulating progress, giving birth to evolution."